Update 3/28/19: LSA review counts are back up to where they had been. It seems Google will factor in reviews for LSA from users that have opted out of shared endorsements. They will likely just not show the content of those reviews on LSA profiles.

Update 3/27/19: If a user has turned off “Shared endorsements” in the Google account privacy settings, the review they posted in Google My Business will not appear and it will not be factored into the review rating and count on a Local Services ad. So apparently about 50% of users have this setting off and Google recently removed reviews from those users from Local Services ads.

A good practice, if you’re able to implement it, is to have customers that found you via Google Local Services leave a review there. If they found you elsewhere then have them leave their review on Google My Business.

Won’t Reviews Be Combined At Some Point?

There have been rumors (and hopes) that Local Services sourced reviews will eventually show on Google My Business. This is mainly due to a line in a Google LSA help article that states:

Local Services reviews will be combined with other reviews across Google in the coming months.

But that line has been there for over a year. At this point, I don’t think it’s going to happen. I don’t see this as being an area of high priority to Google. It may be too complicated for them to implement anyway. 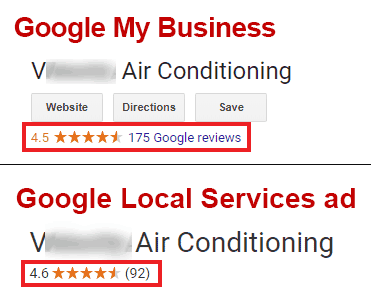 I compared GMB and LSA listings for 20 businesses that didn’t appear to have many LSA sourced reviews. I found that the average difference in the review count between LSA and GMB was -47%. So a business with a review count of 310 on GMB would now have a review count of 165 on LSA.

What I have been unable to determine at this point is if there’s an actual filter in place that is removing “low quality” GMB reviews from the LSA review count, or if it is simply a certain percentage (somewhere around 50%) of reviews from GMB that they decided to exclude when calculating the review rating and count for LSA.

Looking a little deeper at the reviews for one business I didn’t notice a discernable pattern in the reviews that were being excluded. It wasn’t just users that left a rating without a review, or users that have only left 1 review, or user profiles that looked suspicious. It would seem odd that Google would just remove a certain percentage of GMB reviews from the LSA count, but since Google has shown time and time again that they have no way of determining fake reviews from real reviews in GMB, I don’t know how else they would be deciding which reviews to remove.

Also, I recently noticed that EVERY review on LSA listings (regardless of it being sourced from GMB or LSA) had a “Google verified review” label:

This was not visible on the main LSA profile view but another view that’s a little harder to get to. I am still seeing this label on some reviews, but only on some that appear to be sourced from LSA.